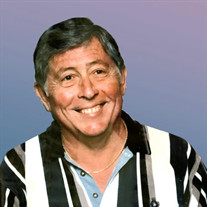 IRWIN JAMES WATTS, Jr., 83, of Hovey Twp., Parker, PA passed away early Friday morning 11-6-20 at Sugarcreek Rest following a period of declining health. Born in Pittsburgh, PA on September 26, 1937, he was the son of the late Irwin James Watts (Sr) and Wilda Stock Watts. He was a graduate of Munhall High School and attended Duff Business School. He retired from US Steel Corp as a production assistant with over thirty years of service. He served as Hovey Township supervisor, roadmaster, vice chairman, and chairman for the past 30 years. He was a member of Parker United Methodist Church, F&AM Lodge #521 of Parker City, Coudersport Consistory, and a longtime social member of VFW #7073 of Parker. An avid golfer, he had been a member of Foxburg Country Club, and was an avid NASCAR fan, attending many races over the years. Surviving are three sons: James (Janine) Watts of Pittsburgh, Jeffrey Watts of Gibsonia, and Jerry Watts of Pittsburgh. Two grandchildren, Justin and Emily Watts, one stepdaughter, Amy (James) Foringer of Kittanning, two stepsons, Harry Bartley of Franklin and Bill (Lisa) Bartley of Parker. Two step-grandchildren, Jessica (Jeremy) Gilbert and Sadye Bartley. Four great-grandchildren, Rylan, Aurora, Orin, and "Little G" (Giovanni). Daughter in law Sophia Zhang of Pittsburgh. In addition to his parents, he was preceded in death by his wife, Rebecca "Becky" Black Watts on November 4, 2019, and a son Jay Watts in 2018. A memorial service will be held at the Paker United Methodist Church on November 14, 2020 at 11am. CDC guidelines, social distancing, and face coverings will be observed. If sick, please offer online condolences.

The family of Irwin James Watts created this Life Tributes page to make it easy to share your memories.

Send flowers to the Watts family.