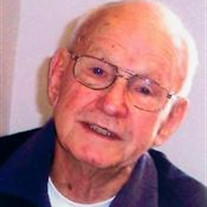 Harlan (Snowball) Foust Jr. 91 of Dutch Hill, Parker, Pa., passed away on December 15, 2013 at his home surrounded by his loving family. Born in Dutch Hill on September 10, 1922., he was son of the late Harlan Sr. and Belle Kriebel Foust. Harlan has been married for 66 years to Dorothy Henry, whom he married on October 28, 1947 who survives "Snowball" served in the United States Army in the South Pacific where he was stationed in Guadalcanal during WWII. Snowball retired from the former Glass Containers Corp., of Parker, after 41 years of service. He was a member of the American Legion of Parker. He enjoyed watching all sports, was very opinionated, and would always yell at the TV to make the players play better and the coaches coach better. He became a big Hockey fan toward the end because of his wife's strong interest in the Penguins. He loved watching his sons, grandsons, granddaughters participate in athletics. You would always see them at the games. He always liked to sing A Happy Birthday wish to every son, daughter in law, grandson and granddaughter. He also enjoyed gardening, was very patriotic and voted in every election. An American flag adorns his front yard and was very particular about its upkeep. Snowball also served as the Perry Township tax collector for 39 years. In addition to his wife Dorothy, Snowball is survived by: Four Sons: Ronald (Cynthia) Foust of Las Vegas, NV; Rick (Jane) Foust of Shippensburg, Pa; Robert (Trish) Foust of Foxburg, Pa; and Barry (Becky) Foust of Franklin, Pa. Nine Grandchildren: Corey (Sue) Henderson, Eric (Rhonda) Foust, Katie Foust, Sean Foust, Kelsey & Oliva Books, Brittany Foust, Bethany Foust, Benjamin and FiancAC. (Christina) Foust. Eight Great Grandchildren: Connor, Alex, Aidan, Noah, Carter, Ayden, Lillian, Chris. Two Sisters: Fern McMillian of MO. and Shirley (Ken) Blauser of Parker, Pa. One Brother: Ronald Foust of Florida. A Daughter In-Law Emily Foust and special friends Randy and Deb Bernard. In addition to his parents he was preceded in death by Two sisters: Helen Perry and Honey Buzard; Three brothers: Byron (Abe), Gerald and Jack Foust. Friends will be received at the H. Jack Buzard Funeral Home (201 S. Wayne St.) Parker, Pa., from 2-4 & 7-9 on Wednesday the 18th. The funeral service will be on Thursday at 11AM at the Funeral Home with Bonnie Hile, his niece, officiating. Members of the American Legion and the VFW Post of Parker will conduct veterans memorial service at 10:45AM Thursday at the Funeral Home. Interment will take place at the Mt. Calvary Cemetery, Dutch Hill.

Harlan (Snowball) Foust Jr. 91 of Dutch Hill, Parker, Pa., passed away on December 15, 2013 at his home surrounded by his loving family. Born in Dutch Hill on September 10, 1922., he was son of the late Harlan Sr. and Belle Kriebel Foust.... View Obituary & Service Information

The family of Harlan "Snowball" Foust created this Life Tributes page to make it easy to share your memories.

Send flowers to the Foust family.