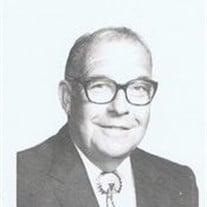 GLENN R. KARNES, 85, of Parker passed away peacefully at his residence at 7:00 AM Sunday morning (06-16-13) following a period of declining health. Born in Hovey Twp., Armstrong Co., Pa. on Nov. 16, 1927, he was the son of the late Roy and Glenna Horner Karnes. He was a 1945 graduate of the former Parker High School. A veteran of World War II, he was honorably discharged from the U.S. Army Air Corps where he had served with the 807th ENGR. Av. Btn. He retired from Pennsylvania Refining Co. (later Penreco) at Karns City with forty-two years of service. At retirement, he was shipping supt. of finished products. Glenn was a well-known square dance caller in the four state area. He was a member of CallerLab (international square dance callers), Pgh. Area Square Dance Callers Assn., and was a founder and first caller of the Alamo Squares of Cowansville. He was a member of the Parker United Methodist Church for over seventy-five years, and was a long-time member of the trustees of the church. Mr. Karnes was a member and past worshipful master of Parker City-Allegheny Valley Lodge # 521 F.& A.M., Coudersport Consistory, Butler Caravan #14, and the Syria Shrine, as well as Connoquenessing Lodge #278 IOOF of Butler. He was a long standing member and past president of Foxburg Country Club, and he was a lifetime member of Hilltop Beagle Club, serving as the first secretary. Surviving are two sisters-in-law: Rose Snyder and husband Ed of Dutch Hill and Betty Helsel of Emlenton; one niece: Sharon Master, and a number of cousins. In addition to his parents, he was preceded in death by his wife, Ruth Helsel Karnes whom he married on Oct. 2, 1975 and who passed Dec. 29, 2011, and a niece, Janice Helsel Fisher. Friends may call from 2-4 and 6-8 PM Wednesday at H. Jack Buzard Funeral Home, 201 So. Wayne Ave., Parker. Funeral services will be held at 11:00 AM Thursday in the funeral home with Rev. Ken Hughes of Parker United Methodist Church and Rev. Nancy Dunmire, a relative, officiating. Burial will follow at Perryville Cemetery, near Parker. Members of Parker City-Allegheny Valley Lodge # 521 will conduct memorial services at 6:00 PM Wednesday in the funeral home. Members of VFW a�" American Legion will conduct memorial services at 11:00 AM Thursday prior to the funeral service.

The family of Glenn Karnes created this Life Tributes page to make it easy to share your memories.

GLENN R. KARNES, 85, of Parker passed away peacefully at his...

Send flowers to the Karnes family.