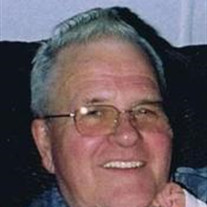 GILBERT EDWIN "Gib" PENNINGTON, 73, of Venango Twp., Parker, Pa. passed away Tuesday evening (12-17-13) at VNA In-Patient Hospice, Butler following an extended illness. Born in Porter Twp., Midland Co., MI on July 19, 1940, he was the son of the late Harry G. and Viola Anna Risley Pennington. "Gib" attended to former Karns City High School, and was protestant by faith. In early years he worked as a tool dresser for JC Walker Gas Co. in Bruin. He then worked as a heavy equipment operator for the former AH-RS Coal Co, and retired from the Slippery Rock Aggregates Corp. of Slippery Rock, Pa. He was a social member of VFW Post 7840 of Hilliards, and was a member of the Clarion Co. Rod and Gun Club. In addition to his wife and daughters, he was quite devoted to and enjoyed spoiling his grandchildren. Surviving are his wife, Sandra "Sonnie" Banner Pennington whom he married in Winchester, VA.; surviving are three daughters and husbands: Vicki (John) Wagner of Butler, Karen (Bill) Wolfe of Emlenton, and Lou Ann (Mark) Strandburg of Warren, Pa.; six grandchildren and five great-grandchildren survive; sister Jessie M. Snyder of Eau Claire and brother Robert (Velma) Pennington of Bruin also survive as well as a number of nieces and nephews. In addition to his parents, he was preceded in death by a brother, Keith Pennington, and two sisters, Lois Scott and Judy Pennington. Friends may call from 2-4 and 6-8 Friday and from 10:00 to 11:00 AM Saturday at H. Jack Buzard Funeral Home, Inc., 201 So. Washington St. in Eau Claire. Funeral services will be held at 11:00 AM Saturday in funeral home with burial to follow at New Salem Cemetery at Annisville (Rte. 38 a�" Butler Co.).

The family of Gilbert Edwin Pennington created this Life Tributes page to make it easy to share your memories.