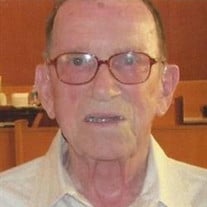 GERALD D. "Sam" SLAGLE, 87, of Parker passed away early Sunday morning (02-02-14) at Chicora Medical Center following a several months illness. Born in Mosgrove, Pa. on July 22, 1926, he was the son of Alf and Eva Marie Duncan Slagle. Arriving in Parker in 1935, he became a resident of the city the remainder of his life, including graduating from the former Parker High School in 1944. Sam also graduated from the former Butler Business College in 1948. Mr. Slagle was a veteran of World War II being honorably discharged from the United State Army Air Force in late 1946. He served much of his military duty in the Aleutian Islands service area, and was a long time member of the American Legion. Sam was employed most of his adult life with Indespec Chemical Co. (formerly Koppers) of Petrolia. He retired in 1986 as purchasing agent for the company. He was a member of First Presbyterian Church of Parker where he had served on the Church Session, also as an elder, and board trustee. He was a member and past worshipful master of Parker City-Allegheny Valley Lodge F. & A.M. # 521 and the New Castle Consistory, both of which had presented him with his 50 year pin of membership. He and his wife "Dot" were involved many years with Masonic camping, especially the National Camping Travellers. The couple also enjoyed many years participating with the Alamo Square Dancers under the direction of the late Glenn Karnes. Surviving are his wife, Dorothy F. McCall Slagle whom he married on July 19th, 1948 in Rimersburg; one daughter and husband, Kathleen Slagle (Terry) Kriebel of Parker; four grandchildren: Darrin (Norma) Kriebel of Punxsutawney, Brandon (Cara) Kriebel of Butler, Jesse (Regina) Aton and Jason Aton, all of North Carolina; four great-grandchildren: Micah, Maddi, Connor, and Raegan Kriebel; one sister: Marcia "Marci" Slagle Corbett of Foxburg; one son-in-law: Maurice William Aton of North Carolina, and a number of nieces and nephews. In addition to his parents, he was preceded in death by a daughter, Roxanne Slagle Aton, and two brothers, Charles R. and John A. Slagle. Friends may call from 2-4 and 6-8 PM Tuesday at H. Jack Buzard Funeral Home, 201 So. Wayne Ave., Parker. Funeral services will be held at 11:00 AM Wednesday at the funeral home with Rev. Ken Hughes officiating. Burial will follow at Parker Presbyterian Cemetery. Members of Masonic Lodge # 521 of Parker will conduct memorial services at 7:45 PM Tuesday in the funeral home. VFW and American Legion Posts will conduct veterans memorial service at 10:45 AM Wednesday morning in the funeral home preceding the funeral. In lieu of flowers, the family suggests memorials to First Presbyterian Church of Parker, Parker, Pa. 16049.

The family of Gerald "Sam" Slagle created this Life Tributes page to make it easy to share your memories.

Send flowers to the Slagle family.