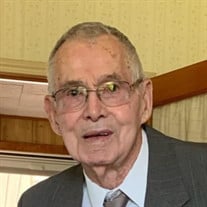 George R. “Dick” Alworth, 89, of West Freedom (Parker, PA), passed away at his residence surrounded by his loving family on Wednesday afternoon, November 18, 2020. Dick was born on August 18, 1931, in Eldorado (Butler, Co.). He is the son of the late James and Edith Uber Alworth. After high school, Dick married Irene Mae "Babe" Stewart who survives, in Fairview Twp., on November 5, 1952. He served in the Korean Conflict from 1952-1954, where he earned numerous commendations during his time of service, notably the bronze star and the Purple Heart. He was discharged with the rank of Corporal in 1954. After his military service, he worked and retired from Indespec as a machinist in 1993. He was a member of the West Freedom United Methodist Church. Dick was involved with many organizations in the area when his health permitted. He was former president in the Perry Twp. V.F.D., a board member of the West Freedom Water Authority as well as a board member of the Concord Cemetery Association. Dick also was a member of New Castle Consistory, Syria Shrine of Pittsburgh, Syria Caravan 14, Parker City Allegheny Valley Lodge 521, past Cmdr. of American Legion Post 598 of Parker, and VFW Post 7073 of Parker. In addition to his wife Irene Mae "Babe" Alworth, he is survived by two daughters: Janice (Brad) Horner of Parker; and Patty (Roy) Alworth of Rimbersburg. His two sons: Rod (Karen) Alworth of Parker; and Tom (Michelle) Alworth of Parker. One Brother: David (Rhonda) Alworth of Eldorado (Parker). Ten grandchildren and numerous great-grandchildren. As well as numerous nieces and nephews. In addition to his parents, Dick was preceded in death by one sister: Betty Irwin. One brother: William Alworth. Friends and Family will be received at the H. Jack Buzard Funeral Home in Parker (201 S. Wayne Ave.) on Saturday the 21st, from 11 am-1 pm & 3 pm-5 pm. A private family funeral will follow at 5 pm. Interment will take place at the Concord Cemetery on Monday. Due to CDC and DOH regulations, masks will be enforced, and a 25 person occupancy will be observed. If you do not feel well, please leave online condolences/sympathy cards at buzardfuneralhomes.com In lieu of flowers, please sends donations to the Clarion, Venango Visiting Nurses Asso.

The family of George R. Alworth created this Life Tributes page to make it easy to share your memories.

Send flowers to the Alworth family.