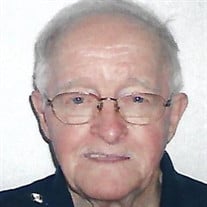 FREDERICK T. “Fritz” ANTHONY, 95, of St. Petersburg, FL., formerly of the Parker-Foxburg area, passed away Saturday evening (12-25-21) at Freedom Square Care Facility in Florida following a period of declining health. Born in Parker, Pa. on October 20, 1926, he was the son of the late James Gay and Daisy Gibb Anthony. He was protestant by faith. While working at the glass factory, he attended and graduated from the former Parker High School, where he played left guard on the school football team. Fritz began a lifelong career in the glass manufacturing industry at the former Knox Glass Co. of Parker in 1943. He left the Parker operation in 1958 to open a new glass operation for Glass Containers in Dayville, CT. He later began employment with Anchor Glass Container. at Royers Ford, Pa. as Control Manager from where he retired. Following retirement, he took great pride in building a beautiful retirement home overlooking the Allegheny River north of Foxburg. He and his wife sold the home in 2013 to begin residence in St. Petersburg, FL. A veteran of World War Two, he served from May 18, 1944, to November 30, 1946, with the U.S.Army in the South Pacific Theater of Operation. He was Honorably Discharged with the rank of Tech/4 - Infantry. Fritz attended Pa. Military School from July to December 1944 prior to placement in the South Pacific. Mr. Anthony was a Life Member of Roy Calvin McGinnis VFW Post 7073 of Parker and American Legion Post 997 of Lamartine. At Parker, he served years as Post Service Officer of the VFW and was the first-ever to be certified by training which was required by the Department of Pennsylvania. He long served in the capacity of lining up veterans for funeral services, arranging schedules and personnel for annual Memorial and Veterans Day services, and assisting officers with the needs of Post 7073. He is survived by his wife, the former Marie M. Hilliard to whom he was married for sixty-three years; son Leslie G. (Monique) Anthony of Connecticut, a nephew with whom he and Marie reared Walter “Skip” (Carolyn) Blymiller of South Carolina, and several other nieces and nephews. In addition to his parents, he was preceded in death by sister Daisy Chesnut and brothers Walter and John “Banjo” Anthony, both of whom served in World War Two at the same time as Fritz. Visitation 5:00 to 8:00 PM Sunday at H. Jack Buzard Funeral Home, 201 So. Wayne Ave., Parker where funeral services will be held Monday at 11:00 AM. The funeral service will begin at 11:00 AM with VFW and American Legion conducting a Veteran Military Memorial Service. Interment will follow the funeral service at Sunset Hills Memorial Garden at Seneca (Venango Co.). The family requests that masks be worn and social distancing be observed during visitation and funeral service with regards to the health of family members from out-of-town.

The family of Frederick "Fritz" T. Anthony created this Life Tributes page to make it easy to share your memories.

Send flowers to the Anthony family.