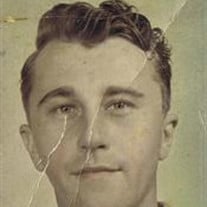 Frank W. Miller, Sr., 97, of Perry Twp., Parker, Pa. passed away Saturday evening (07-16-11) at Golden Living Care Center in Clarion following an illness. Born on the Austria/Switzerland border in Germany on Sept. 17, 1913, he was the son of the late Charles and Mary Marie Krizel Miller. Originally Catholic by faith, he was in later years affiliated with Park Hill Church of God at West Freedom. He was employed as a carpenter working out of the former Local Union 500 of Butler, now #922. He also served as secretary of finance for the union, and would have received his seventy year membership pin this year. A veteran of the U.S. Army Air Corps of World War II, he was honorably discharged with the rank of T-4 in Dec. of 1945. He earned the Good Conduct Medal, the Asiatic-Pacific Campaign Medal with two Bronze Stars, the World War II Victory Medal, and the Meritorious Unit Award. He was a longtime member of Charles A. Black American Legion Post #598 of Parker. Surviving are four sons: William Dennis, Sr., Frank W., Jr., Jeffrey L. Sr., and Kevin Miller, all of Parker; one daughter: Nancy Brooks of Loveland, CO.; also survived by fourteen grandchildren, five great-grandchildren, and one great-greatgrandchild. In addition to his parents, he was preceded in death by his wife, Geneva M. Myers Miller whom he married Feb. 3, 1951 and who passed Nov. 6, 2002; also preceded by a grandson, two sisters, and two brothers. Friends may call from 2-4 and 7-9 PM Tuesday at Buzard Funeral Home, Wayne Ave., Parker. Funeral services will be held at 11:00 AM Wednesday at the funeral home with Pastor Lonny Wolford, a Church of God minister, officiating. Interment in Perryville Cemetery.

Frank W. Miller, Sr., 97, of Perry Twp., Parker, Pa. passed away Saturday evening (07-16-11) at Golden Living Care Center in Clarion following an illness. Born on the Austria/Switzerland border in Germany on Sept. 17, 1913, he was the son... View Obituary & Service Information

The family of Frank W. Miller created this Life Tributes page to make it easy to share your memories.

Send flowers to the Miller family.