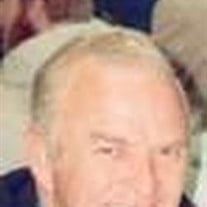 FRANCIS PAUL "Chick" McGUIRK, 84, of Foxburg passed away late Sunday evening (06-15-14) at Parker Personal Care Home following a period of declining health. Born in St. Petersburg, Pa. on March 31, 1930, he was the son of the late Frank Vincent and Edna Mae Bell McGuirk. A 1948 graduate of the former St. Petersburg High School, he later graduated from Clarion State Teachers College (now University) with a B.S. in Applied Sciences. He also earned a Masters Degree in Guidance from Westminster College in New Wilmington. Mr. McGuirk began an over thirty plus year teaching career at the former Parker High School (now ACV School District at Foxburg), retiring in 1989. For many years he coached and assisted in coaching boy's basketball. "Chick" was proud to have served his country during the Korean Conflict, serving four years with the U. S. Air Force as a gunner on B-50 aircraft. Among many duty stations with the Strategic Air Command, he served in Georgia, England, and other stations. He was a member of American Legion Post 636 of Foxburg. A longtime member of the Church of God, he was long affiliated with the church at Callensburg. He and his wife enjoyed many winters in Myrtle Beach, and they enjoyed travelling to many other destinations. For many years Chick and his son painted homes in the ACV area as an avocation. An avid golfer, he was a longtime member and past president and director of the Foxburg Country Club. He served on the board of directors and was past president of the Foxburg Free Library. He is survived by his wife, the former Evelyn Imogene Radaker, whom he married in 1957 at the Callensburg Church of God. Her father, the late Rev. Ralph Radaker, conducted the wedding ceremony. He is also survived by his son and wife, Terrence "Terry" L. and Connie McGuirk of Perryville (Parker), Pa.; two grandsons: Jacob Nicholson "Nick" McGuirk and wife Jenny of Emlenton and Blayne Harrison McGuirk of Perryville; one great-grandson, Jacob Jeremiah McGuirk; also a number of nieces and nephews. In addition to his parents, he was preceded in death by a brother, Charles "Chuck" McGuirk, and two sisters: Cleora Fitzgerald and Ruth Gilmore. Friends may call from 2-4 and 6-8 PM Wednesday at H. Jack Buzard Funeral Home, 201 So. Wayne Ave., Parker, and for an hour preceding the service at 11:00 AM Thursday in the funeral home. Rev. Eric Mitchell, Church of God pastor, and Father William McGuirk, his nephew, will co-officiate. Interment will follow at Foxburg Cemetery. Members of the VFW and American Legion Posts of Parker will conduct services at 10:45 AM Thursday in the funeral home.

The family of Francis Paul "Chick" McGuirk created this Life Tributes page to make it easy to share your memories.