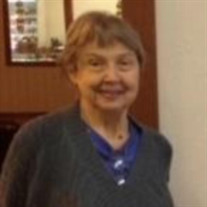 Frances Elizabeth “Beth” Kelly of Bruin, PA passed away on October 19th, after a long illness, just 4 days after her 80th birthday. She was a resident at Clarview Nursing Home since 2019 and had been admitted there several times before that. Remembered as an avid reader, antique collector, and lover of art, Beth earned both a B.A. and M.A. at Penn State University in Art History. She went on to teach Art History as a professor at Western Illinois University in the 70s and Slippery Rock College from 1977-84, during which time she made several study trips to Italy. She then retired in 1984 for health reasons and was plagued with chronic conditions that kept her sidelined from pursuing her career. Always the consummate student, Beth enjoyed going to art gallery openings and visiting formal gardens, and she surrounded herself with hundreds of books and magazines on art that filled her time. She was enchanted by the beauty of the Butler and Clarion County countryside and coveted long drives along the Allegheny River afforded by friends. Beth embodied an ethereal quality reminiscent of another time and place- a world less harsh, filled with all things beautiful. She is survived by her sister-in-law; Carol Kelly, nieces; Amy (Jay Jurma) Kelly and Erin (Nathan Jones) Kelly, and a grandniece; Christine Jones. Beth was beloved by her dear friends; Joelle Logue of Buffalo, NY, Duane Tremba of Perryville, Linda and Burt Pisor, and Maisie Ryder of Bruin, as well as many residents and staff she met at Clarview. Beth was preceded in death by her parents; Clemon and Helen Afelter Kelly, her sister; Nancy, her brother; Dan, and her former companion; Jerry Coleman. At this time, there are no memorials planned. The H. Jack Buzard Funeral Home of Parker, PA is assisting with arrangements at this time.

Frances Elizabeth &#8220;Beth&#8221; Kelly of Bruin, PA passed away on October 19th, after a long illness, just 4 days after her 80th birthday. She was a resident at Clarview Nursing Home since 2019 and had been admitted there several times... View Obituary & Service Information

The family of Frances Elizabeth Kelly created this Life Tributes page to make it easy to share your memories.

Send flowers to the Kelly family.