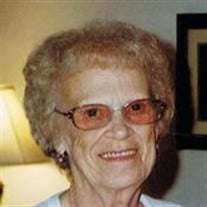 FERN A. HUTCHISON CAMPBELL, 86, of Eau Claire, former longtime resident of Ridgeville, passed away at 1:10 AM Tuesday morning (6-5-12) at her residence of natural causes. Born in Ridgeville, Pa. on August 28, 1925, she was the daughter of the late Maurice and Katherine Christie Hutchison. On Jan. 29, 1949, she married the late Walter P. "Moose" Campbell who passed away Feb. 14, 2010. They were married over 61 years, and spent most of those years in the Ridgeville area. She was a member of the Ridgeville United Methodist Church. In her early years, she was employed at the National Guard Armory at Butler, Clark's Candy of Pittsburgh, and lived and worked at the IOOF Home in Grove City. Fern enjoyed spending time with her loved ones, shopping and eating out at the drop of a hat, and had a love-hate relationship with her feline friend, Kitty. She is survived by a daughter: Darlene Twentier and husband Gary of Eau Claire; a son Kent Campbell and wife Cathy of Polk, Pa.; two granddaughters: Christie Twentier and husband Nick Longenbach of Camp Hill, Pa. and Jennifer Stover and husband Chad of Cranberry (Venango Co.), Pa.; three great-grandchildren: Mackenzie Karnes, Jack Walter and Luke Longenbach, all three of whom referred to her affectionally as "GG". She is also survived by a number of nieces, nephews, and friends. In addition to her parents and husband, she was preceded in death by a sister, Gloria Barrett and an infant sister, Florence Hutchison. Friends may call from 3-5 and 6-8 PM Thursday at H. Jack Buzard Funeral Home, 201 So. Main St. Eau Claire. Funeral services will be held at 8:15 PM in the funeral home with Rev. Richard Updegraff, United Methodist Minister, officiating. Burial will follow Friday morning at 10:00 AM Friday in the Rosewood Cemetery at Ridgeville.

FERN A. HUTCHISON CAMPBELL, 86, of Eau Claire, former longtime resident of Ridgeville, passed away at 1:10 AM Tuesday morning (6-5-12) at her residence of natural causes. Born in Ridgeville, Pa. on August 28, 1925, she was the daughter of... View Obituary & Service Information

The family of Fern A. Campbell created this Life Tributes page to make it easy to share your memories.

Send flowers to the Campbell family.