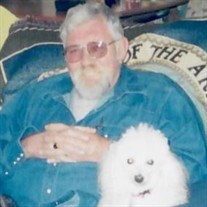 Edward J. Sheffer, 77, of Franklin, formerly of West Freedom, Parker, Emlenton area, passed away peacefully on Saturday, October 9, 2021, at Autumn Grove. Born on March 19, 1944, he was the son of the late Louise Peters Sheffer Leary and Bern Sheffer. He later married Pamela “Pam” Bottomley. Ed worked for over 40 years as a truck driver. He proudly served in the U.S. Army as a Transportation Specialist E-2. He was also a Vietnam War Veteran and earned many medals in the time that he had served. Ed was a lifelong member of the VFW Post 1835 in Franklin. In his free time, he enjoyed watching Pittsburgh sports, especially the Steelers and Pirates. Most of his Sundays consisted of him watching football games. He was also Protestant by faith. Ed is survived by his wife; Pamela Bottomley, his 2 children; Patrick Sheffer of Rimersburg and Scott (Julie) Sheffer of Cincinnati, OH., and his 4 grandchildren; Eyon Sheffer of Rimersburg, and Matthew, Kaci, and Benjamin Sheffer of Cincinnati. He is also survived by his sister, Linda Spoonamore of Indianapolis, his aunt, Velma Stewart of West Freedom, along with his many nieces, nephews, and cousins. Along with his parents, he was preceded in death by his sister, Elizabeth Ranney, and his Grandfather Burton Peters In lieu of flowers, donations can be sent to the V.E.T.S Honor Guard (PO Box 137 Franklin, PA 16323) or the VFW Post 1835 (415 9th Street Franklin, PA 16323).

The family of Edward J. Sheffer created this Life Tributes page to make it easy to share your memories.

Send flowers to the Sheffer family.