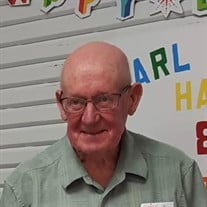 EARL H. STALKER, 81, of Hilliards, Pa. passed away Friday evening (05-01-2020) at Butler Memorial Hospital following an illness (non - Coronavirus). Born in Venango Twp., Butler Co. on June 4, 1938, he was the son of the late Lee D. and Maude Young Stalker. Earl was first married on May 18, 1961, to the former Judy Arlene Cratty who passed away July 11, 1995. He later married Norma Jean Master Brown in May of 2006, and she passed away May 1, 2012, the exact date of Earl’s passing eight years later. Mr. Stalker was a dedicated Christian gentleman, was faithful to the Fellowship Baptist Church on Rte. 38 near Eau Claire. He was employed many years at Pullman-Standard of Butler until its closing. He was then employed by Kerry Coal Co. of Beaver Falls. He was also an accomplished private welder. Earl loved his family, and especially enjoying his grandchildren. He is survived by daughters and husbands Roxanne (Ken) Tanner of West Sunbury and Rhonda (Mike) Devine of Pittsburgh and one son and wife, Rodney (Emily) Stalker of Charleston, SC; also six grandchildren; four stepchildren: Cynthia (Denny) Fehl and Jeff (Roxanne) Brown all of Butler, Crystal (Mike) Garrison of Ohio, and Dana (Michelle) Brown of Seattle, WA.; eleven step-grandchildren and three step-greatgrandchildren. Sister Luree Kriedler of Indianapolis, IN.; brothers Dale (Duke) Stalker of Eau Claire, Merle Stalker of Emlenton, and Richard Stalker of Butler; also nieces and nephews. In addition to parents and wives, he was preceded in death by sister Nancy Kerr and brothers Frank, Fred, Donald Joe, and Jack Stalker. Due to the Coronavirus, and following guidelines set by CDC and Pa. Dept. of Health, a private visitation and funeral will be held for Earl Stalker followed by a private burial at Allegheny Cemetery, near Parker. The Buzard Funeral Home staff of Eau Claire is assisting the family at this time. In lieu of flowers, the family suggests Memorials in Earl’s name to Fellowship Baptist Church, 3727 Oneida Valley Rd., Emlenton, Pa. 16373.

The family of Earl H. Stalker created this Life Tributes page to make it easy to share your memories.

Send flowers to the Stalker family.