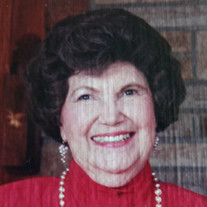 ELIZABETH VERNE TERWILLIGER MAHOOD, 92, of Foxburg passed away Monday evening (05-21-18) of natural causes at Parker Personal Care Center. Verne was born of May 26, 1925 on a fourth generation Terwilliger farm in Perry Twp., Clarion Co. to the late William E., Sr. and Essie Elizabeth Myers Terwilliger. She was a graduate of the former Parker High School, Franklin Commercial College, attended Clarion State College, and graduated from Interstate Commercial Law School. Mrs. Mahood was employed as a medical secretary at Polk State School, traffic manager at former Glass Containers Corp. at Knox, and concluded her working career as Traffic Manager and Safety Director at McCauley Trucking Co. of New Bethlehem. She was a member of the Foxburg United Methodist Church, the United Methodist Women, and was Youth Coordinator of the church.  She was a member of the Order of Eastern Star Chapter #60 at Parker since 1949, was Past Worthy Matron, and served many of the Star Points for years. Having a passion for Foxburg, surrounding communities, and education, she was president and board member of Foxburg Free Library for many years, the Allegheny-Clarion Valley School planning commission, and the Foxburg Medical Center.  She was instrumental in bringing medical care to the A.C.V. area, opening the first center in the Library building, and finally establishing the present day modern medical center.  For decades of service with the A.C. Valley Development Corp. in many offices and positions, the ACV Medical Center was finally names in her honor. On August 6, 1949, she married Richard C. Mahood at the First Presbyterian Church of Parker, and after fifty nine years of marriage, Mr. Mahood passed away on June 3, 2008. Of that union were born two sons:  Scott (Kathy) Mahood of Erie and Brad (Sara) Mahood of Olympia, WA.; grandchildren, Christian (Jennifer) Mahood Justin (Liz) Mahood, Alysabeth Mahood, and Adam Mahood; great-grandchildren, Lilly, and Matthew; brother, E. Dale (Gloria) Terwilliger; and a number of nieces and nephews. In addition to her husband and parents, she was preceded in death by sisters, Even and Mildred “Tiki”; brother, William E. Terwilliger, Jr.   Visitation will be Tuesday (May 29) from 2-4 and 6-8 PM at H. Jack Buzard Funeral Home, 201 So. Wayne Ave., Parker, PA. Funeral service (no viewing) at 11:00 AM on Wednesday (May 30) at the First Presbyterian Church of Parker with Rev. Dan Myers, retired United Methodist minister officiating. Order of the Eastern Star Chapter 60 service will be held at 6:00 PM Tuesday at the funeral home. In lieu of flowers, the family asks donations be made in Verne’s name at the Foxburg free library, 31 Main St. Foxburg, PA 16036.

The family of ELIZABETH VERNE (TERWILLIGER) MAHOOD created this Life Tributes page to make it easy to share your memories.