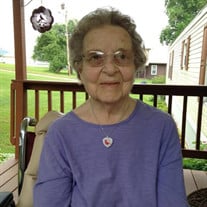 E. JUNE ARMSTRONG GARDNER, 95, of Parker, a resident of Clarvirew Nursing and Rehab. Center for sometime, passed away Monday evening at the Center. Born in Parker, Pa. on June 1, 1925, she was the daughter of the late Harry and Ethel Hallack Armstrong. On September 25, 1947 she wed Richard H. Gardner who passed away August 8, 1985. A graduate of the former Parker High School, June was a lifelong and devoted member of First Presbyterian Church of Parker. She assisted with Bible and Sunday School as well as working funeral dinners and any other capacities upon which she was called. June carried a positive and sincere smile, lent a helping means of support to others, and found the positive side of life’s situations.Mrs. Gardner was employed over fifteen years as a receptionist at Central Electric Co-Op (REA) at Parker until the early eighties. Surviving are two sons and wives: Richard J. and Lucy Gardner of Duluth, MN and Jeff and Kate Gardner of Deltaville, VA, and son-in-law Tom Cooper of Parker; one sister survives: Mary Armstrong McCoy of Parker. She is survived by six grandchildren: Tommy, Kevin, Erin, Jeff, Guy, and Spencer; ten great-grandchildren: Taylor, Ryan, Zach, Abby, Avery, Lexi, Logan, Luke, Emily, and Baby Boy Gardner on the way, as well as several nieces and nephews also survive. In addition to parents and husband, June was preceded in death by daughter Susan Gardner Cooper, brother John Armstrong, and sisters Eva Huemrich, Rose Sarver, and Betty Bittinger West. Friends and family will be received at the funeral home from 11-1 on Saturday. The funeral home will have social distancing protocols in place and strongly recommends those who are attending to wear masks. We respectfully ask if you feel sick or have other health conditions to stay home. Due to the new orders of Gov. Wolf, we will be limiting the number of people in the funeral home to 10 at a time. The funeral will be held at 1:30 pm at the Parker Presbyterian Church. Social distancing and mitigation efforts will be in place. Burial will follow in Parker Presbyterian Cemetery. On June 1, 2021, a Celebration of June’s Life will be held at a time and location to be announced.

E. JUNE ARMSTRONG GARDNER, 95, of Parker, a resident of Clarvirew Nursing and Rehab. Center for sometime, passed away Monday evening at the Center. Born in Parker, Pa. on June 1, 1925, she was the daughter of the late Harry and Ethel Hallack... View Obituary & Service Information

The family of E. June Gardner created this Life Tributes page to make it easy to share your memories.

E. JUNE ARMSTRONG GARDNER, 95, of Parker, a resident of Clarvirew...

Send flowers to the Gardner family.