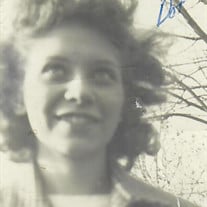 DOROTHY MARIE STEWART STALKER, 89, of Chicora, formerly of Parker, passed away Monday evening (12-31-18) at Chicora Medical Center of natural causes. Born in Black Fox, Clarion Co. on December 6, 1929, she was daughter of late James H. and Ruth Barger Stewart. She was married at Robinson Chapel, Parker, Pa. on Jan. 7, 1950 to Frank Lee Stalker who passed away September 4, 1993. As a young woman, she was employed at Owens-Illinois Glass at Clarion, Glass Containers at Parker, and later by Rea’s Parker House, Jay and Mary’s, and Tarr’s Tavern.  Later in life, she was a homemaker and beloved grandmother. Dorothy is survived by a daughter Reida Stalker; also a daughter and husband, Saundra Leigh Heeter and Mike of Knox, Pa.; eight grandchildren and seventeen great-grandchildren; sister Annabelle Hilliard of Parker, and a number of nieces and nephews. In addition to her parents and husband, she was preceded in death by an infant son, Allen Scott Stalker, daughter Laurie Jean McFadden, and sister Rita A. McCall. Friends may call from 2-4 and 6-8 PM Friday at H. Jack Buzard Funeral Home, 201 So. Wayne Ave., Parker where funeral services will be held at 8:00 PM.  Burial will follow at 10:00 AM Saturday morning in Perryville Cemetery, near Parker.

The family of Dorothy Marie (Stewart) Stalker created this Life Tributes page to make it easy to share your memories.