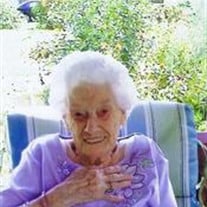 DOROTHY A. FROSS, 100, of Clarview Nursing and Rehabilitation Center, Sligo, formerly of Parker, passed away Thursday evening (11-21-13) at the home following a period of declining health. Born on March 8, 1913 in Brady's Bend, Armstrong Co., she was the daughter of the late Harry and Margaret Sybert Snyder. Dorothy was a long time member of the Parker United Methodist Church and the United Methodist Women. She was also a member of the Historical Society of Brady's Bend. She was married to Blair Fross who passed away in March of 1984. Surviving are four daughters: Myrna Sabich of Parker, Fayrene Gardocky of New Castle, Patricia Price of Cochranton, and Sharon Kelly of Seneca; twenty-six grandchildren, forty-five great-grandchildren, and six great-great grandchildren, as well as numerous nieces and nephews. In addition to parents and husband, she was preceded in death by a son, Leonard Fross, two daughters, Joan Sokol and Peggy Fross, and a grandaughter, Karla Zeigler. She was also preceded by two infant sons and an infant daughter. Nine siblings also preceded as follows: James, Herb, Frank, Don, and Addison Snyder, Lois Greenawalt, Florence McCloskey, Nellie Loose, and Margaret Wagner. Friends may call from 2:00 to 6:00 PM Monday at H. Jack Buzard Funeral Home, Inc., 201 So. Wayne Ave., Parker, and at the church for an hour preceding the funeral service. Funeral service will be held at 11:00 AM Tuesday with Rev. Ken Hughes, church pastor, officiating. Burial will follow at Parker Presbyterian Cemetery.

The family of Dorothy A. Fross created this Life Tributes page to make it easy to share your memories.

DOROTHY A. FROSS, 100, of Clarview Nursing and Rehabilitation...

Send flowers to the Fross family.