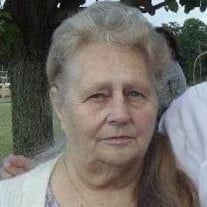 Doris J. (Switzer) Fair, of Parker, known as Jeannie to some, passed away on Wednesday, April 27th, 2022, surrounded by her family, from complications of a 10-year battle with breast cancer. She fought fiercely right up to the end. Born at home on August 10, 1938, at the Cratty Building in Parker, PA., she was the daughter of the late Thomas Russell Sr. and Elsie (Dunkle) Switzer. She married Virgil E. Fair on June 15, 1956, in Petrolia, PA. He proceeded her in death on June 17, 1996. Doris was active in her community. She served as tax assessor for Licking Township for 20+ years and was an Election Poll worker for many years. She was also a member of the Callensburg/Licking Township Ladies Auxiliary, holding the position of President for several years. She belonged to the Ruby Red Hatters and enjoyed the fun and friendship of their meetings until her health prevented her from doing so. She drove bus for several years for Keystone School District and worked at many local stores including Gallagher’s Plaza, Paul’s Market, and S&M Sales. In her spare time, she enjoyed gardening, decorating her home, attending local “singings”, and watching westerns, especially those of John Wayne! She never missed a Central Electric Annual Meeting! She is survived by her daughter; Connie S. (Terry) Williams of Cranberry, and her son; Jeffery E. (Angie) Fair of Parker. Her grandchildren; Cullin S. (Ashlee) Williams of Cranberry, Tenille L. (Julian) Rivas of Seneca, Brandi L. (Joe) Fair of Callensburg, Brandon “B.J.” Fair and Brady W. Fair, both of Parker, along with her 4 great-grandchildren who called her “Gramma Great”; Connor Williams of Cranberry, Tanner Henderson, Haddie Rivas, and Baby Girl Rivas (due in October) all of Seneca. Surviving are her brothers; Colonel “Sonny” (Nancy) Switzer of Sligo and Deryl Switzer of Emlenton, and a sister; Dolly Wolfe of Sligo. Doris is also survived by numerous nieces and nephews. In addition to her parents and husband, she was proceeded in death by a sister; Betty Kriebel, her brothers; Thomas Switzer, Rich Switzer, and Edward Switzer, a sister-in-law; Donna Switzer, and special friends; Glenn and Deloris Stants. Family and Friends will be received from 6:00-8:00PM on Sunday, May 1st, and 10:00-11:00AM on Monday, May 2nd, at the H. Jack Buzard Funeral Home in Parker, where funeral services will be held on Monday, May 2nd, at 11:00AM. Interment will follow at the Callensburg Cemetery. The family suggests memorials be made to the Clarion Cancer Center Patient Care Fund (150 Doctors Lane Suite 1 Clarion, PA 16214).

Doris J. (Switzer) Fair, of Parker, known as Jeannie to some, passed away on Wednesday, April 27th, 2022, surrounded by her family, from complications of a 10-year battle with breast cancer. She fought fiercely right up to the end. Born at... View Obituary & Service Information

The family of Doris J. Fair created this Life Tributes page to make it easy to share your memories.

Doris J. (Switzer) Fair, of Parker, known as Jeannie to some,...

Send flowers to the Fair family.