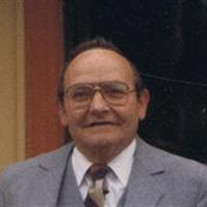 Donel C. Callander, 90, of Doc Walker Road, village of West Freedom, passed away at the Clarion Hospital at 6:10 a.m. Friday, September 23, 2011. Born September 26, 1920, in Dutch Hill (Perry Township, Clarion County), he was the twin son of the late Merle C. and Nina M. (Fair) Callander. He graduated from the former Parker High School in 1940. Don and his twin brother Ron served in the United States Army during World War II from 1944 to 1946. They were together all through the service, serving in the South Pacific on Luzon Island, Philippines. He served with Company D of the 145th Infantry Regiment, 37th Division. Don was a proud member of the American Legion Charles A. Black Post 498 of Parker for 61 years, serving two terms as Commander in 2006-2007. Before entering the service, he was employed by the Pennsylvania Railroad Co. After his tour of service, he was employed by S. J. Stiver Plumbing & Heating in Dutch Hill. He later started his own business, Callander Plumbing & Heating, and was in business for around 10 years. He then was employed by Hunters Truck Sales & Service of Eau Claire beginning February 1, 1962, retiring in 1985. After retirement he worked part-time when Hunters needed him. He was married in Ohio to the former Viola Thompson on March 15, 1940. They were married for 62 years when she passed away November 29, 2002. He attended the West Freedom United Methodist church until recent ill health prevented his attendance. He dearly loved his children, grandchildren and great-grandchildren and was always ready to lend a helping hand. Don was "Mr. Fix-it" and could repair almost anything. Many people went to him for advice and any part or tool they might need. He is survived by a son Leslie (Barbara) and a daughter, Elaine (Larry "Pep") Simpson both of West Freedom. Also surviving are eight grandchildren: Scott Freeberg of Houtzdale, Mary Beth (Mark) Conner of St. Petersburg, Laurie (Glenn) Moore of Hilliards, Wendy (Darrick) Stewart, of Sligo, Wesley (Kim) Callander of Parker, Pete Callander of West Freedom, John Callander of Sligo, and Vince (Amy) Callander of Myers Hollow Road, Parker. Also surviving are 11 great-grandchildren. He is also survived by two sisters: Reverend Bessie Maihle, of West Freedom and Kathy (Ralph) Morrison of Bellefontaine, Ohio. Also surviving is a sister-in-law, Alvera Leckliter of Silver Springs, NY. In addition to his parents and wife, Mr. Callander was preceded in death by an infant daughter, his twin brother Ronel, and three sisters, Dorothy Callander, Alene Anthony and Doris Pierce. Friends may call from 2 to 4 and 7 to 9 p.m. Sunday and again on Monday at the H. Jack Buzard Funeral Home, Wayne Street, Parker. Visitation will also be held from 1 to 2 p.m. Tuesday at the West Freedom United Methodist Church with services beginning at 2 p.m. Services will be conducted by his sister, Reverend Bessie Maihle, and Associate Pastor Kenneth Hughes. Interment will be in Rimersburg Cemetery where members of the VFW and American Legion posts of Parker will conduct veterans services at graveside.

The family of Donel C. Callander created this Life Tributes page to make it easy to share your memories.

Send flowers to the Callander family.