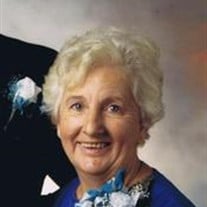 Dolores Margaret Rogers Brammer, 85, who resided at the Parker Personal Care home after recently moving from a care home in Shippenville, formerly of Foxburg, passed away of natural causes Thursday evening at UPMC Montefiore Hospital in Pittsburgh. Born on April 14, 1928, in Pittsburgh, she was the daughter of the late Carl Edward and Louise Emma Weber Rogers. She was married for more than 50 years to the late Albert Vondon Brammer Sr., who she married on Dec. 9, 1950, and who passed on May 2, 2001. Before moving to Foxburg, Dolores was a member of the Zion Lutheran Church in Lawrenceville and later the Methodist Church in Foxburg. A devoted homemaker and housewife, she loved rooting for the Pittsburgh Pirates baseball team. Dolores could often be found at the post office chatting away to everyone she saw and if she wasn't there you could often find her at the local cafe in Foxburg enjoying coffee and talking to more people. Dolores often would spend time at bingo in Parker as well, and was referred to by many as "Grandma Bingo." She is survived by three daughters, Deborah (Bill) Edwards, Darlene Repp and her significant other, Paul, and Denise (Bill Jr.) Page of Foxburg; three sons, Carl Edward Brammer, Albert V. Jr. (Lisa) Brammer and Dean Brammer; 12 grandchildren, Carl Brammer Jr., Christina Brammer, Patrick Russell, Andrew Brammer, Otis Brammer, Cooper Brammer, Heather Brammer, Kenneth Repp Jr., Mathew Brammer, Jason Repp, Dakota and Tierra Page; six great-grandchildren; a number of nieces and nephews; and one brother-in-law, John "Uncle Jack" Koch. In addition to her parents and husband, she was preceded in death by an infant child; three sisters, Louise Meyers, Libby Gialanello and Ellen Koch; one brother, Carl Rogers; and one grandson, Robert Brammer. BRAMMER - Friends of Dolores Margaret Rogers Brammer, who died Thursday, Dec. 26, 2013, will be received from 2 to 4 and 6 to 8 p.m. Monday at the H. Jack Buzard Funeral Home, 201 S. Wayne Ave., Parker. The funeral will be at 11 a.m. Tuesday at the funeral home. A private burial will take place at the Riverview Memorial Park in Verona.

The family of Dolores Margaret Rogers Brammer created this Life Tributes page to make it easy to share your memories.

Dolores Margaret Rogers Brammer, 85, who resided at the Parker...