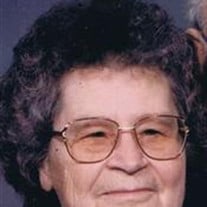 DESSIE MAE BOBBERT, 88, of Butler passed away Tuesday morning at VNA-InPatient Hospice, Butler, following an illness. Born in Perry Township, Clarion Co., on Nov. 3, 1922, she was the daughter of the late Albert and Emma Elvira Everetts Hullihan. Mrs. Bobbert was instrumental in helping form and establishing the New Life Ministries (Church of God of Prophecy) Church on Mercer Road in Butler. She served as Sunday School teacher and Missionary leader for many years. Dessie will be remembered for baking bread to be sold to raise money for the purchase of a new piano for the church. She had worked in housekeeping at Butler Memorial Hospital for a number of years, and had worked for the former John Honse Co. of Butler. Surviving are three daughters and husbands: Arlene (Melvin) Thompson and Joanne (Jim) Hughes, both of Butler, and Lori (Don) Wolabaugh of Abbottstown (York Co.), Pa.; six grandchildren: Patti Myers, Gregory Hughes, Michele Palmer, Jason Thompson, Nicole Woltz, and Joshua Wolabaugh; eleven great-grandchildren and three great-greatgrandchildren; many cousins, nieces, and nephews. She was married to Richard C. Bobbert on April 3, 1943, and he passed away April 25, 2007; she was also preceded in death by a grandson, Ricky Hughes. Visitation from 1-4 and 5-8 PM today (Weds.) at Family Life Ministry - Church of God of Prophecy Church, 239 Mercer Rd., Butler, and for an hour preceding the funeral. Funeral services will be held at 11:00 AM Thursday at the church with Rev. Don Holabaugh, her son-in-law, and Rev. Bob Hile, church pastor, officiating. Burial in Perryville Cemetery, near Parker.

The family of Dessie Mae Bobbert created this Life Tributes page to make it easy to share your memories.

Send flowers to the Bobbert family.