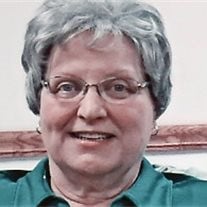 DELYTE F. GRIMM MURRAY, 67, of Butler, formerly of Parker, passed early Saturday morning at her residence in Butler following an illness. Born in Venango Co., Pa. on August 4th 1951, daughter of late Halbert R and Betty Faye King Grimm.  Following graduation from Allegheny-Clarion Valley School in 1969, she earned a degree as a Registered Nurse. She practiced a career in nursing much of her adult life.  She was a dedicated member of the Church of Jesus Christ of the Latter Day Saints.  She was married March 24th 1973 to the late John Ross Murray, and their marriage was sealed for eternity at the Washington D.C. Temple of the Church on April 15,1978. John died October 24th,2009. Delyte’s accomplishments in life was in her name: she was an absolute delight with her smile, caring, and loving presence.  She is survived by her Son Paul Murray and companion, Heather Nulph of West Freedom, Daughter Carla Murray and companion, Peter Banasick, of Butler. Brother Rick Grimm and companion, Murvell Delpino of Gaithersburg MD. And six grandchildren: Braden, Ethan, Colton, Travis, Jase, Izak. In addition to her parents, and her husband John Ross Murray, she was preceded in death by her Mother in law Marry Murray, and father in law Tom Murray.  Friends may call 1-5 pm today (Monday), August 13th, at H. Jack Buzard Funeral Home, 201 South Wayne Ave. Parker. Funeral service will be held at 5:30 pm Monday at the Parker Community Building (firehall) on Wayne Avenue , Parker PA 16049. Private Interment Tuesday morning at 9:30 am at the Parker Presbyterian Cemetery In lieu of flowers, memorial donations can be made in Delyte’s name to the Parker City VFD. To view/ send condolences, flowers,sympathy cards, visit www.buzardfuneralhomes.com

The family of Delyte F (Grimm) Murray created this Life Tributes page to make it easy to share your memories.