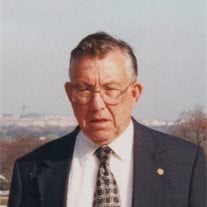 Dean R. Shakley, 80, of Orchard Manor, Grove City, formerly of Parker, Pa. passed away at 8:00 PM Monday evening (01-30-17) at the Manor where he had resided since June of 2014. Born in Petrolia, Pa. on March 30, 1936, he was the son of the late Harry R. and Garnet Shoup Shakley. Dean graduated from Fairview Twp.-Karns City High School in 1954, and immediately began a forty-three year career with Witco Chemical (now again Sonneborne) in Petrolia.  He worked maintenance, supervisory, and assisted in initiating the activated carbon division of the refinery. He was a member for over fifty years with the Parker City Vol. Fire Dept. where he served as treasurer for twenty three years, bingo “caller’ many years, and assisted with various deeds completed by the fire company.  He was a member and past president of Armstrong County Firemens’ Assn., and served as member and past officer of the Western Pa. Firemen’ Assn. Dean first served with Parker City Council, and was later elected Mayor of the city for several terms.  He was also involved with Redevelopment of Armstrong County for many years as a representative of Parker City. Mr. Shakley belonged to the former Parker Rotary, and its successor, PACSO. Beginning in the 1960’s, Dean began working in funeral service with the late Fred S. Bowser, and continued with Buzard Funeral Homes until ill health prevailed. In 1985 he began attending the annual speed weeks at Daytona with his friend Buzard.  He continued this interest in NASCAR at Daytona and several other tracks until 2011 when health failed. He was social member of VFW Post 7073, and life member of Connoquennessing Lodge 278 IOOF of Butler. Surviving are one daughter: Pamela Olama and husband Hossein (“Fred”) of Orlando, FL.; two sons:  James Sproull of Richmond, VA. and Robert “Skip” and wife Beverly Sproull of Alabama; eight grandchildren:  Jessica and Alex Olama, James, Robert, John, and Emily Sproull, Benjamin and Nicholas Ace; number of great-grandchildren two sisters: Velma Jean (Jeannie) Shakley of Parker and Margaret (Peg) Merryman of Petrolia and Polk; one brother: Donald L.and wife Mary Shakley of Chicora; number of nieces and nephews. In addition to his parents, Dean’s first wife, Peggy Fross, and his second wife, Elizabeth “Betty” Rose Sproull both preceded him in death.  He was also preceded in death by two daughters:  Deana Shakley and Christine Anne Sproull Ace; one daughter-in-law, Sandy Klingler Sproull; two brothers:  John Wallace “Wally” Shakley and Allen Bruce “Butch” Shakley; one sister:  Nancy Jane Shakley. Friends may call from 2-4 and 6-8 PM Thursday at H. Jack Buzard Funeral Home, 201 So. Wayne Ave., Parker, where funeral services will be held at 11:00 AM Friday.  Rev Ken Hughes will officiate.  Interment in Parker Presbyterian Cemetery. Members of Parker City VFD will conduct memorial services for Dean at 6:00 PM Thursday in funeral home.

The family of Dean R. Shakley created this Life Tributes page to make it easy to share your memories.

Send flowers to the Shakley family.