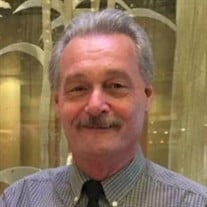 CHARLES WALTER “Chuck” MARSH, Jr., 70, of Sligo, Pa. passed away Wednesday evening (01-26-22) at Butler Memorial Hospital following a few weeks of illness. Born in Clarion Co., Pa. on July 13, 1951, he was the son of the late Charles and Dorothea Barger Marsh. He was a 1970 graduate of the Union Joint High School at Rimersburg, and thoroughly looked forward to attending all class reunions. Chuck worked nearly thirty-five years at the former Indespec Co. at Petrolia, with his last position being a boiler operator. He was a member of Sligo Borough Council since 1990 where he served over fifteen years as president. He was a member of Sligo Water and Sewer Authority, Borough Representative to COG Swimming Pool and Recreation Board, and was a Board Member of the Rails to Trails - Redbank Valley. He, along with his wife Sandra, enjoyed the outdoors, especially biking and hunting, and was quite proud to be Grandpa to six grandchildren. Surviving are his wife Sandra Lynn Robinson Marsh whom he married August 22, 1970; two daughters and husbands: Charlene (Kyle) Klein of Sligo and Sheena (Victor) Perales of San Antonio. Texas; six grandchildren: Kylee, Owen, and Michaela Klein, Dexter Irwin, Charlotte and Victor Perales; brother Virgil (Candy) Marsh as well as sisters Barb Schrecengost, Shirley (Bill) Salizzoni, Phyllis (Jerry) Stockdill, and Ileen Dunkle, all of the Rimersburg area; a number of nieces and nephews. In addition to his parents, he was preceded in death by infant brother Bernard and sisters Florence Bobbert, Geraldine Switzer, and Marsha Salizzoni. Friends may call from 6-8 PM Sunday and from 2-4 and 6-8 Monday at H. Jack Buzard Funeral Home, 201 So. Wayne Ave., Parker. Funeral services will be held at 11:00 AM Tuesday in the funeral home. Chuck will be laid to rest at Concord Presbyterian Cemetery, Perry Twp., Clarion County.

The family of Charles Walter Marsh Jr created this Life Tributes page to make it easy to share your memories.

Send flowers to the Marsh family.