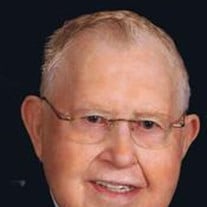 Cecil L. Beatty, 90, of Eau Claire passed away Friday evening at Allegheny General Hospital in Pittsburgh of complications due to a fall in his home last Saturday. Born in Eau Claire on June 5, 1921, he was the son of the late Joseph M. and Velma Kinder Beatty. He was first married to Vivian Mosholder on Jan. 24, 1946, and she passed away Jan. 23, 1999. He later married Marilyn Osborne Shoup on June 19, 2008, and she survives. Cecil was a graduate of the former Eau Claire High School (Academy) and Grove City College. A veteran of World War II, he was discharged from the U.S. Army Air Force with the rank of tech sergeant. He earned the Good Conduct Medal, Asia-Pacific Theater Service Medal, European Theater Service Medal, and the Victory Medal. He was a member of American Legion Post 598 of Parker. Many decades ago, Cecil, along with the assistance of his late father, Joe Beatty, founded the J.M. Beatty Furniture Co. of Eau Claire. He worked all his adult life in the day to day operation of the store, working the Friday before his fall on Saturday. He was extremely proud of the family operation, including the move to the new location in Washington Township some years ago. Cecil was a member of the North Main Street Church of God in Butler for over 50 years. He served on the board of directors, the building committee, taught the Keenagers senior Bible class, and served as usher and attendance recorder for many years. He played a major role in the various capital fundraising campaigns at the church, as well as being present in working with pastors and architects in expansion of the original church building. He enjoyed making hospital calls with the pastors, as well as extending a welcome to new folks to join the church. He was most proud to being a lifetime member of the Fraternal Order of Police, of the Butler County and Pennsylvania chapters. An avid reader of religious books and biographical writings, he held great retention of what he read. He held a great love of southern gospel music, and attended gospel musical reunions all over the East Coast. Cecil also loved to quote jokes from his beloved Reader's Digest. In addition to his wife Marilyn, he is survived by his daughter, Kathy Beatty of Butler; his son, Joseph "Joe" (Jane Cole) Beatty of Butler; one grandson, Chad (Tonya) Beatty of Chicora; one great-grandson, Jude Beatty; one stepson, Kyle (Chilton) Shoup of Emlenton; and many nieces and nephews. Cecil was the last surviving member of the original Beatty family, being preceded by sisters, Josephine Hunter and Jean Magill, and brothers, F. Merle, James M. Sr. and Harry O. Beatty. BEATTY - Visitation for Cecil L. Beatty, who died Friday, Aug. 26, 2011, will be from 2 to 8 p.m. Monday at the H. Jack Buzard Funeral Home, 201 S. Washington St., Eau Claire. Funeral services will be at 11 a.m. Tuesday in the funeral home with Rev. Gordon K. Powell and Rev. Kenneth Hall officiating. Burial will be in Eau Claire Cemetery. The American Legion and VFW Posts of Parker will conduct veterans services graveside at 11:45 a.m. Tuesday in Eau Claire Cemetery.

Cecil L. Beatty, 90, of Eau Claire passed away Friday evening at Allegheny General Hospital in Pittsburgh of complications due to a fall in his home last Saturday. Born in Eau Claire on June 5, 1921, he was the son of the late Joseph M. and... View Obituary & Service Information

The family of Cecil L. Beatty created this Life Tributes page to make it easy to share your memories.

Send flowers to the Beatty family.