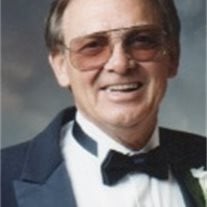 C. DEAN THOMPSON, 85, of Venango Two., Eau Claire passed away Monday afternoon at VNA-In-Patient Hospice, Butler following an illness. Born in Emlenton, Pa. on Oct. 5, 1931, he was the son of the late Clarence C. and Hazel Courson Thompson. He was married in in Concord Two., Butler Co. in 1951 to the former Betty J. Mondell, who survives. They were married nearly sixty-six years. He was a longtime member of Bethel United Methodist Church of Eau Claire. Dean served with the U.S. Army during the Korean Conflict from 1952 to 1954 being honorably discharged with rank of Corporal. He was then called back to active duty during the Cuban Crisis era and served from 1958 to 1962, again being honorably discharged with rank of Sergeant First Class.  To his credit, he served over nine years of active duty with the Army.  He was a member of both the American Legion and Veterans of Foreign Wars. Dean enjoyed an over fifty years professional career in automobile sales beginning in high school years with the former J.M.Beatty Chrysler-Plymouth of Eau Claire. He served at Beatty’s as a salesman, sales manager, and partner for a period of time. While at the Beatty operation, Dean earned numerous sales awards in both district and regional division from Chrysler Corp.  He later operated his own sales operations with his sons in both Mercer and Clarion, from which he retired. Dean served on the Moniteau School Board for several terms, and served as a school bus contractor with the A. C. Valley School District from 1973 to 2000. In addition to his wife, he is survived by two sons and wives:  Timothy Scott “Tim” and Laurie Thompson of Eau Claire and Rodney K. and Kimberly Thompson of Tulsa, Oklahoma; five grandsons: Quinnten, Justin (Erica), Zackary (Kelley), and twins Cody and Kyle Thompson;  great-grandchildren: Ashton, twins Cameron and Caelynn, and Carson Thompson.  Also survived by nieces and nephews. In addition to his parents, he was preceded in death by one brother, Charles C. Thompson who passed Jan. 30, 2001.

C. DEAN THOMPSON, 85, of Venango Two., Eau Claire passed away Monday afternoon at VNA-In-Patient Hospice, Butler following an illness. Born in Emlenton, Pa. on Oct. 5, 1931, he was the son of the late Clarence C. and Hazel Courson Thompson. He... View Obituary & Service Information

The family of C. Dean Thompson created this Life Tributes page to make it easy to share your memories.

Send flowers to the Thompson family.