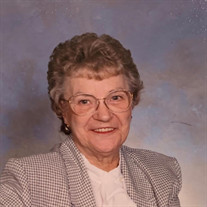 BONNIE (Bonita) J. MONTGOMERY KRIESS, 83, of Grove City, formerly of the Butler County area, passed away Tuesday morning at AHN-Grove City Health Center following a brief illness. Born in Venango Twp., Butler Co., on December 4, 1936, she was the daughter of the late Ronald “Buss” and Pauline Shoup Montgomery. Bonnie was married on Mar. 9, 1959 in the Bethel United Methodist Church of Eau Claire to Kenneth G. Kriess who passed away May 19, 2018. She was of the United Methodist faith. Working as a caregiver, she had been employed at the former Laurel Manor in Emlenton, and later at Parker Personal Care Home. Surviving are a daughter Imogene Renee (Nick) Kaufman of Minnesota and sons Kevin A. Kriess of Zelienople and Kenneth G. (Tracy) Kriess, Jr. of Ellwood City, and five grandchildren. Also survived by nine siblings: Pat Knight of KY., Wanda Scott of Ohio, Judy Wagner of Butler, Gretchen Roberts of TX., Brenda Rowell of SC, Kay Duplaga of Ohio, Ruby Younkers of Butler, Ronald Montgomery of Mayport, and Richard Montgomery of SC, and several nieces and nephews. In addition to parents and husband, she was preceded in death by an infant daughter, infant sister, sister Carol Gaillott and brother Ernie Montgomery. Visitation will be held from Noon to 3:00 PM Saturday with funeral service held at 3:00 PM at H. Jack Buzard Funeral Home, 201 So. Wash. St. in Eau Claire. Per Governor’s Mandate, masks must be worn (health reasons) and social distancing will be followed as well as limiting visitors to no more than twenty five at a time. Memorials may be made to Bethel United Methodist Church, % Mrs. Pearl Montgomery, Eau Claire, Pa. 16030.

The family of Bonnie Kriess created this Life Tributes page to make it easy to share your memories.

Send flowers to the Kriess family.