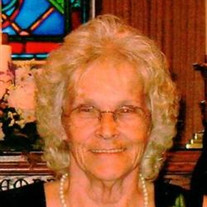 BETTY J. WADE, 76, of Eau Claire passed away Thursday evening (05-15-14) at VNA In-Patient Hospice in Butler following a two month illness. Born in Scrubgrass Twp., Venango Co., Pa. on February 19, 1938, she was the daughter of the late C. Wilbur and Aleena Burk Riddle. She was protestant by faith. Betty had been employed for many years by the former Thompson's Market of Eau Claire and J.M. Beatty Furniture, also of Eau Claire. She was in the employ of the Foxburg Inn at Foxburg at the time of the onset of her illness. She enjoyed working with ceramics, but the greatest joy was tending to her grandchildren and great-grandchildren. Surviving are a son and wife, Edward L. (Kim) Wade, Jr. of Boyers and a daughter, Deborah J. Heckathorne of Polk, Pa.; survived by eight grandchildren and nine great-grandchildren; two sisters: Gladys Jacobs and Blanche Sherman, both of Emlenton, and a number of nieces and nephews. In addition to her parents, she was preceded in death by her husband, Edward L. Wade, Sr. whom she married August 22, 1956 and who passed away March 31, 2005, and a daughter, Cheryl A. Wade Eiler who passed November 13, 2009, and a brother, Clarence "Buck" Riddle. Private visitation was held Sunday at Buzard Funeral Home in Eau Claire, with committal and burial service later this week at convenience of family at New Salem Cemetery in Annisville, Wash. Twp., Butler Co.

The family of Betty J. Wade created this Life Tributes page to make it easy to share your memories.

Send flowers to the Wade family.