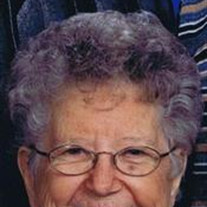 BETTY E. RADAKER LeVIER, 90, of Fairview Twp., Karns City, Pa. passed away Tuesday afternoon (05-22-12) at the residence of her daughter, with whom she made her home. Born on June 22, 1921 in Dennison Ohio, she was the daughter of the late Joseph C. Radaker and Susie E. Murphy Radaker Kriebel. Betty was a lifelong member of the Church of God, first at Dutch Hill, then Parker, and then the Park Hill Church of God at West Freedom. She was a home maker, and was a loving mother, grand and great grandmother. She was a former member of the Order of Eastern Star. Betty worked at the former Bantam Plant in Butler during World War II, where she was especially proud of her work as a welder. Surviving are one daughter and husband, Eloise E. LeVier Smith and Ross of Karns City and one son, Joseph M. LeVier of Chicora; four grandchildren: Tracy Smith Schnur (Jeff) of Emlenton, Troy R. Smith (Linda) of Karns City, Joseph LeVier Jr. (Marilou) of Butler, and Kristie LeVier Lawrence (Israel) of Grove City; five greatgrandchildren: Tanner and Halie Schnur, Kayla and Kristen Smith, and Ryan LeView; five step-greatgrandsons: Nathaniel and Dante, Israel, Jr., Hunter, and Peyton; also survived by one brother, Richard C. Radaker and wife Peggy of Bonita Springs, FL., and several nieces and nephews. In addition to her parents, she was preceded in death by her husband, LeRoy M. LeVier whom she married in Parker on Nov. 5, 1945, and three sisters: Margie Radaker, Grace Radaker LeVier, and Joanne Radaker Callender. Friends may call from 5:00 to 7:30 PM Thursday at H. Jack Buzard Funeral Home, 201 So. Wayne Ave., Parker, and at the church for an hour preceding the funeral. Funeral services will be held at 10:00 AM Friday from the Park Hill Church of God, Lime Plant Rd., West Freedom (near Parker) with Pastor Jim Callender, her nephew and a Church of God pastor, officiating. Burial will follow at Bear Creek Cemetery at Petrolia.

BETTY E. RADAKER LeVIER, 90, of Fairview Twp., Karns City, Pa. passed away Tuesday afternoon (05-22-12) at the residence of her daughter, with whom she made her home. Born on June 22, 1921 in Dennison Ohio, she was the daughter of the late... View Obituary & Service Information

The family of Betty Radaker LeVier created this Life Tributes page to make it easy to share your memories.

Send flowers to the LeVier family.