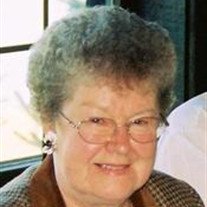 AUDREY DUESPOHL BECKER TODORICH, 80, of East Brady, formerly of Emlenton, passed peacefully surrounded by her family on Friday afternoon, April 5, 2013 from a brief battle with acute leukemia. Born on March 11, 1933 in Fairview Twp., Butler Co., she was the eldest daughter of the late Harold Edward and Eleanor Korn Duespohl. Audrey married Herbert Becker on July 2, 1955 and he passed away Nov. 3, 1987. She and her husband owned and operated Pine Grove Market and Becker's Fuel Home Heating Delivery Service in Emlenton. She later married Joseph Todorich in 1992 and he passed in 2009. She was a member of the Fairview United Presbyterian Church, and also belonged to the Young at Heart Society at St. Patrick's Church at Brady's Bend. Gardening, playing cards (especially 500 bid), bingo, putting together puzzles, and Christmas baking were among her favorite hobbies. Audrey's deepest passion was spending time with her family. She was a loving and adored mother of two sons, Karl Becker and wife Tracy of Clarion and Steve Becker and fiancee' Judy Cleveland of Emlenton; also step-mother to Tommy Todorich and wife Chris of East Brady and Connie Cogley and husband Gordon, also of East Brady. Audrey was a devoted and caring grandmother to her grandson, Douglas Becker of Clarion, and to four step-grandchildren, Kelly Todorich-Rumbaugh, Becky Todorich, Jenny and Joseph Cogley, as well as three step great-grandchildren. She is also survived by a brother Terry Duespohl of Seneca. Brothers and sisters-in-laws surviving are Wayne King of Salem, Ohio, Walter and Ann Becker of Emlenton, Borita Becker of Hawaii, Marge Hazen of Wadesville, Indiana, and Renie Harter of Roseville, California. In addition to her parents and husbands, she was preceded in death by sister Donna Duespohl King and niece Laurie King. Friends may call from 2-4 and 7-9 PM Tuesday at H. Jack Buzard Funeral Home, 201 So. Wayne Ave., Parker. Funeral services will be held at 11:00 AM Wednesday at the funeral home with Pastor Stephanie Weaver of Sligo officiating. Interment will follow at Bear Creek Cemetery in Petrolia. The family suggests memorial donations to the Leukemia and Lymphoma Society in Audrey's name.

The family of Audrey Becker Todorich created this Life Tributes page to make it easy to share your memories.

Send flowers to the Todorich family.