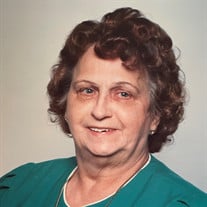 ARLENE B. FAIR, 90, of West Freedom, Parker, Pa. passed away Sunday morning (01-17-21) at her son’s residence in Oil City following a period of declining health. Born in West Monterey, Pa. on February 9, 1930, she was the daughter of the late Alfred and Emily Everett Barbera. She was married to John E. Fair on Sept. 8, 1951, and he passed away April 3, 1984. At her passing, she was a member of West Freedom United Methodist Church and had taught Sunday and Bible School at the former Wesleyan Church of West Freedom. Arlene was a caregiver in private and nursing homes and served as a cook at the Plaza near Emlenton and was a baker at the former Gallagher’s near Callensburg. She had served as a Brownie leader for four years and as a Girl Scout leader for five years in Perry Twp., West Freedom. Surviving is a daughter Carol Fair and fiancé Joe Altadonna of Erie and a son James L. and wife Carolyn Fair of Oil City; four grandchildren: Michelle Fair, Jeremy (Natalie) Hedrick, John Carl (Catherine) Wyant, and Brynna (Tyler) Manuel; six great-grandchildren: Hannah Wyant, Sarah Fair, Declan Hedrick, Ellienna, Charlotte, and Oliver Manuel. Also survived by three sisters: Janis Neely of Beaver Falls, Patricia (James) Wolfe of Foxburg, and Lola Morgan of Emlenton. In addition to her parents and husband, she was preceded by her son Byron “Barney” Fair and infant daughter Cora Lynn Fair; brother Gary Barbera and infant brother Paul Barbera and sisters Donna Merryman, Mary Barbera, Wanda Bilinsky, and infant Emily Barbera. Limited visitation from Noon to 3:00 PM Friday (Jan.22) at H. Jack Buzard Funeral Home, 201 So. Wayne Ave., Parker where a funeral service will be held at 3:00 PM with Rev. Dr. Daryl Larsen officiating. Private interment will follow at Perryville Cemetery, near Parker. Masks must be worn and social distancing will be observed per CDC and Health Dept. Mandates. If not feeling well, please send a sympathy card to the family.

The family of Arlene B. Fair created this Life Tributes page to make it easy to share your memories.

Send flowers to the Fair family.