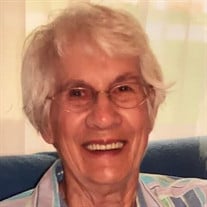 Arlene Sayers Rose Denslinger, 92 of Dutch Hill, Perry Township, Parker, PA, passed away on July 18, 2019, at Chicora Medical Center. Arlene was born in New Castle on December 29, 1926, to the late Walter and Gladys Hugus Sayers. Arlene was raised on a chicken farm in Curlsville during the great depression and knew the value of hard work. She graduated Valedictorian of her class from Sligo High School in 1944 and went on to attend Indiana State Teachers College. Arlene was a homemaker raising her children, she also worked as a secretary for the Allegheny-Clarion Valley School District for many years until her retirement in 1987. Arlene married her first husband, William “Bill” Stewart Rose, on September 2, 1947, and moved to the Rose farm in Dutch Hill. She and Bill raised their five children on the farm until he preceded her in death in April of 1977. Arlene married her second husband, Carl H. Denslinger on February 14, 1979. She and Carl enjoyed their golden years together traveling across the country to visit their children in other states and to vacation. Carl preceded her in death in April of 2010. Arlene was a longtime member of Concord Presbyterian Church in Perry Township, being involved in many aspects of the church through her years. Arlene was a loving mother, grandmother, and great-grandmother. She always had a large vegetable garden, strawberry patch, berry bushes, and flower garden. She enjoyed quilting and doing puzzles and playing various card games. She left her family with many cherished memories of her love and kindness. Arlene is survived by her children, Suellen Jean Miloszewski and husband John of Emlenton, William Richard Rose of Emlenton, Christopher Rose and wife Cecilia of Lutz, FL, Keith Rose and wife Trish of Dutch Hill, and Brian Rose of Parker, five step-children, Thomas Denslinger and wife Cindy of Mechanicsburg, Julie Evanish and husband Mike of Harrisburg, Jane Barnett and husband Steve of Knox, Wendy Denslinger of Franklin, and Steve Denslinger and wife Pam of Dallas, TX, nine grandchildren, David Miloszewski and wife Marisa of Mullica Hill, NJ, Matt Miloszewski of Aliquippa, Jennifer Kronsteiner and husband Noah of Portland, OR, William Rose and wife Ashtin of Lutz, FL, Cory Rose and wife Amber of Lutz, FL, Kristen Rose of Six Points, Tanner Rose of Pittsburgh, Casey Rose and wife Kelsey of Jackson Center, and Kodie Rose and fiancée Madison Cooper of West Freedom, ten great-grandchildren, Zoe, Avery, Sara, and Claire Miloszewski, and Fynn, Gunnar, Dawson, Axton, Lila, and Conrad Rose, and one more on the way, numerous step-grandchildren and step-great-grandchildren, as well as numerous nieces and nephews. In addition to her parents and husbands, Arlene was preceded in death by her sister Ellen Snyder and her husband Clifford and brother Vern Sayers. Funeral arrangements have been entrusted to Black Funeral Homes, Stoneboro & Sandy Lake. Family and friends are welcome at the H. Jack Buzard Funeral Home, 201 Wayne Street, Parker, on Sunday, July 21, from 2 pm until 6 pm. A funeral service will follow visitation at 6 pm at the funeral home with the Reverend Brian D. Houser, Pastor of Concord Presbyterian Church, officiating. Interment will take place in Concord Presbyterian Church Cemetery. Memorials in Arlene’s name may be made to Concord Presbyterian Church, 2662 Concord Church Road, Parker, PA 16049

The family of Arlene Sayer Rose Denslinger created this Life Tributes page to make it easy to share your memories.

Send flowers to the Denslinger family.