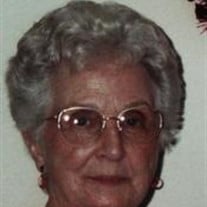 ARLA MAE RADAKER, 87, of Clarion, Pa. passed away Thursday at Parkview Hospital, Ft. Wayne, Indiana following a sudden illness while visiting children in the Indiana-Ohio area. Born in Clearfield, Pa. on December 29, 1923, she was the daughter of the late Frederick Paul and Margaret Elizabeth Korman Pentz. She was married to Rev. Bruce Hilton Radaker on August 28, 1946, and he passed away on June 13, 2000. Mae leaves behind a legacy as a Godly woman and servant of God. She was long a member of the Church of God, most recently at Liberty Street Church of God in Clarion. Over the years serving with her late husband's pastorates, she served as a Sunday School teacher and did much Missionary work for the church at large. She was a graduate of the former Feller's Beauty Collge in Oil City where she was class president. In early years, Mae worked as a munitins inspector with Bell Aircraft. Surviving are three daughters and husbands: Peggy (Les) Wall of Bradenton, FL., Linda (Rev. Michael) Roach of Wabash, IN., and Judy (Rev. Bruce) Wilson of Clarion; three sons and wives: Bruce Eugene (Vicki) Radaker of Atlanta, GA., Mark (Vickie) Radaker and Rex (Debbie) Radaker, all of Dayton, OH.; nineteen grandchildren and fourteen great-grandchildren; three sisters: Blanche (Glen) Piper of Rochester, NY., Dora (John) Shay and Norma (Berlon) Dial, allof FL., and a sister-in-law: Ethel Pentz of Indiana; number of nieces and nephews also survive. In addition to parents and husband, an infant son and brother preceded in death. Visitation will be held from 6:00 to 9:00 PM Tuesday at Liberty Street Church of God in Clarion, Pa. and from 10:00 to 11:00 AM Wednesday. Funeral services will be held at 11:00 AM in the Church with Rev. Nicholas (Nick) Wilson, her grandson, and Rev. Bruce Wilson, church pastor, officiating. Private interment will be in Mt. Calvary Cemetery at Dutch Hill, Perry Township, Clarion County. In lieu of flowers, the family suggests memorials to the Liberty Street Church of God (Building Fund), Liberty Street, Clarion, Pa. 16214.

ARLA MAE RADAKER, 87, of Clarion, Pa. passed away Thursday at Parkview Hospital, Ft. Wayne, Indiana following a sudden illness while visiting children in the Indiana-Ohio area. Born in Clearfield, Pa. on December 29, 1923, she was the daughter... View Obituary & Service Information

The family of Arla Mae Radaker created this Life Tributes page to make it easy to share your memories.

ARLA MAE RADAKER, 87, of Clarion, Pa. passed away Thursday at...

Send flowers to the Radaker family.