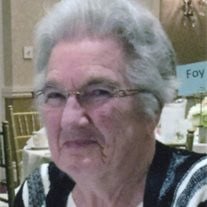 Alice Jane Sloan Altmire, 93, of Venango Twp., Butler, Co. passed away at 9:00 AM Monday morning at the emergency room of Butler Hospital after an illness at Oertel Personal Care Center of The Concordia Home in Cabot, where she had resided since last fall. Born in Cherry Valley, Butler Co. on March 15, 1925, she was the daughter of the late Henry L. and Annie McGinnis Sloan. Alice was married for 64 years to Harold D. Altmire whom she married on April 12, 1946 and  who passed June 2, 2010. She was a graduate of the former Eau Claire High School and had served many years as a postal clerk at the Eau Claire Post Office of which she retired. A longtime and dedicated member of the East Unity Presbyterian Church, she attended the church for her entire 93 years, spanning from infancy until her passing. Alice served in various capacities of the church as a Primary Pre-School Teacher with the “little ones”, Sunday School and Vacation Bible School Teacher. She was a charter member and secretary of the Ruth Fleming Missionary Society of the Church. She loved music and was a choir member as well as a member of the East Unity Trio. She and her husband Harold were the proud parents of two children, Daughter Martha J. Altmire with whom she shared her home, and son David and wife Carol of Orlando, FL.  Shi is also survived by many nieces and nephews. The last surviving member of the Henry Sloan family, she was preceded in death by two sisters, Emaline Ross and Betty McCurdy, and three brothers, Harold, Donald, and Walter Sloan. Visitation will be held from 1:00 to 4:00 PM Thursday at H. Jack Buzard Funeral Home (201 S. Washington St., Eau Claire) where funeral services will be conducted by Dr. Paul Schaffer, church pastor, officiating.  Private Burial will follow Friday at East Unity Church Cemetery.

Alice Jane Sloan Altmire, 93, of Venango Twp., Butler, Co. passed away at 9:00 AM Monday morning at the emergency room of Butler Hospital after an illness at Oertel Personal Care Center of The Concordia Home in Cabot, where she had resided since... View Obituary & Service Information

The family of Alice Jane (Sloan) Altmire created this Life Tributes page to make it easy to share your memories.