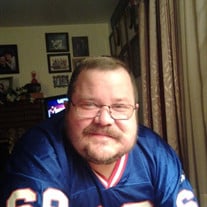 ADAM TODD BARTLEY, 52, of Parker passed away Wednesday at 12:30 PM (10-21-22) at his residence surrounded by his loving, caring family members. Born in Butler, Pa. on March 8, 1963, he was the son of Mary Lou Pipher Bartley of Perryville who survives, and the late Joe A. Bartley who passed away in 1993. He was a 1981 graduate of Allegheny-Clarion Valley School at Foxburg, and completed certification as a welder at Clarion County Vo-Tech. Well known as a dedicated welder by occupation, Adam began his career with Venco, Co. at Foxburg, and later with Trinity Industries at Butler.  He then began a twenty five year career with Joy Mfg. Co. at Franklin Pa., from were he recently retired.  While at Joy, he was a member of I. A. Machinist and Aerospace Union, and served as union steward for many years. Mr. Bartley was a member of the Parker United Methodist Church, where he and Triscia were married. He was a member of Parker City-Allegheny Valley Lodge F.&A.M. #521 and the New Castle Consistory. Adam was a longtime member and supporter of the NRA as well as a social member of VFW Post 7073 of Parker. He enjoyed his family outings, was dedicated to his occupation, and loved playing with his two dog “buddies” Mattie and Claire. He is survived by his loving and caring wife, Triscia L. Courson Bartley whom he married Sept. 10, 1988; two children: Shayla (Mark Schuler) of Butler and Justin (Emily) Bartley of Parker; grandson Joe Bartley of Parker with two additional expected grandchildren due soon;  mother Mary Lou Bartley of Perryville and mother-in-law Carol Courson of Parker; three brothers:  Audley (Deniece) Bartley of St. Petersburg, Andrew Bartley of Cleveland, OH, and Arnold (Tammy) Bartley of West Freedom; siblings-in-law: Tom, Tim, Tammy, Troy, Chuck, and Todd Courson; and very special siblings in name, Valerie and Todd Hindman; also survived by aunts, uncles, nieces and nephews. He was preceded in death by father Joe Bartley and father-in-law Tom Courson. Friends may call from 2-4 and 6-8 PM Saturday and Sunday at H. Jack Buzard Funeral Home, 201 So. Wayne Ave., Parker.  Funeral service (no  viewing) will be 11:00 AM Monday at First United Methodist Church of Parker (Washington at Jackson) with Rev. Ken Hughes, longtime personal friend, officiating. Members of Parker City-Allegheny Valley Lodge #521 will conduct memorial services at 6:00 PM Sunday in the funeral home. In lieu of flowers, the family suggests memorials to Parker United Methodist Church, % treasurer Brenda Courson, Parker, Pa.  16049.

ADAM TODD BARTLEY, 52, of Parker passed away Wednesday at 12:30 PM (10-21-22) at his residence surrounded by his loving, caring family members. Born in Butler, Pa. on March 8, 1963, he was the son of Mary Lou Pipher Bartley of Perryville who... View Obituary & Service Information

The family of Adam Todd Bartley created this Life Tributes page to make it easy to share your memories.

Send flowers to the Bartley family.