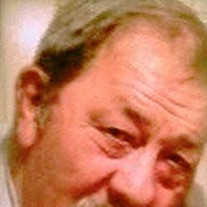 AARON RAY DICK, 72, of Foxburg, Pa. passed away Saturday (05-24-14) morning at UPMC-Seneca, surrounded by his loved ones, following an illness. Born in Roaring Springs, Blair Co., Pa. on Nov. 24, 1941, he was the son of the late Paul Calvin and Agnes Marie Albright Dick. At the age of seventeen, he enlisted in the U. S. Army serving three years in Europe and stateside. He was honorably discharged with rank of PFC. Mr. Dick was a truck driver for over thirty years. He enjoyed hunting, fishing, metal scraping, yard sales, and mostly cooking for family and friends. Aaron enjoyed the sports of wrestling and NASCAR. A loving father and grandfather, he was also known by the family as a great story-teller and jokester. Surviving are his wife, his companion Sharon Morton, and eight children: Theresa (Chuck) Defibaugh of Parker, Michele (Mike) Anthony of DuBois, Gail Ann (Fred) Wingard of Emlenton, Lacey (Denny) Clinger of Clarion, Everett Lehnortt of Foxburg, Paul (Lori) Dick of Parker, Michael Dick of Franklin, and Keith Dick of Parker; also seventeen grandchildren and fifteen great-grandchildren; also two brothers: Howard and John Dick, and a number of nieces and nephews. In addition to his parents, he was preceded in death by a grandson, Matthew Bucholz, and two brothers, LeRoy and Richard Dick. Friends may call from 2-4 and 6-8 PM Wednesday at H. Jack Buzard Funeral Home, 201 So. Wayne Ave., Parker, where funeral services will be held at 11:00 AM Thursday. Interment will follow at Perryville Cemetery near Parker. Members of VFW and American Legion Posts of Parker will conduct services at 10:45 AM Thursday at funeral home preceding the funeral.

AARON RAY DICK, 72, of Foxburg, Pa. passed away Saturday (05-24-14) morning at UPMC-Seneca, surrounded by his loved ones, following an illness. Born in Roaring Springs, Blair Co., Pa. on Nov. 24, 1941, he was the son of the late Paul Calvin... View Obituary & Service Information

The family of Aaron Ray Dick created this Life Tributes page to make it easy to share your memories.

Send flowers to the Dick family.